It would be an understatement to say that Cares is a fussy soul. He's the only one we know who would bring a tape measure to the hotel to make sure that the size of the dance floor was exactly right for the fancy steps he had in mind. Herb and Karen are serious amateur ballroom dancers, and they had big-time dancing in mind. Where would the band sit? And what about acoustics and lighting? Would the curtains be drawn or half drawn or closed? The Ritz-Carlton catering staff looked on in awe and utter bewilderment. Henri Boubée, the general manager of the hotel and a friend of Cares, took the safest route, instructing his staff to give Cares whatever he desired.
After tastings, discussion, and not a little angst, the menu for 70 smartly attired guests was set. Reception on the Roof-top, with sushi, caviar and hors d' oeuvres, accompanied by a rare Nebuchadnezzar bottling of Moet et Chandon Imperial Brut Champagne. A Nebuchadnezzar holds the equivalent of 20 bottles. Pouring Champagne from the bottle requires a specially created cradle, with at least two waiters helping to pour. Steve Fisher, the hotel's sommelier, had innocently suggested he had such a bottle in his vast Ritz cellars, but it was a suggestion which Cares turned into an idee fixe. Something ventured, everything gained - it was a smashing success. The "first menu" was for dinner, overseen entirely by Executive Chef Richard Rayment: Terrine of Fresh Duck Foie Gras with Black Truffles, followed by Steamed Maine Lobster with Truffle Fettucine, with a main course of Beef Wellington with Mushroom Duxelle, Sauce Bordelaise. Cares is a "Renaissance man" of the good life. 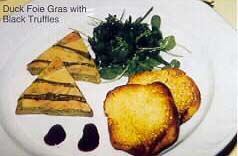 Nowhere, however, was his taste for things ever finer than in the wines he picked to go with the various courses. This was the second menu." The fabulous Louis Roederer Cristal 1990 started the first course (this Champagne had beaten out all other grand tete du cuvees in the market, at a mind boggling tasting at his home: there were Krug, Krug Mesnil, Dom Perignon, La Grande Dame, Salon, Taittinger, and others). The choice of the ad hoc panel was unanimous. The second course was accompanied by two wines: Corton Charlemagne 1990 Grand Cru en magnum (Remoissenet) and by Beringer Private Reserve Chardonnay 1995, Cares thought he might need something slightly more assertive with lobster, hence the Beringer. It doesn't get any better. The 1990 Corton is a four to five star vintage, Burgundy's greatest white wine; and Beringer is Beringer: a symbol of excellence.
Then followed a succession of other extraordinary wines. Among them, magnums of Chateau Petrus 1985 the most expensive wine in the world; it's Pomerol's "first growth," 100 percent Merlot. I had introduced Cares to the splendid Pomerol a few years back, and hence another idee fixe. But we cautioned him: "Chateau Petrus in magnums for 70 people!" But our words happily were wasted. Even if he had decided against the Petrus, the second matching wine for the course was the incredible Beringer Merlot Private Reserve . 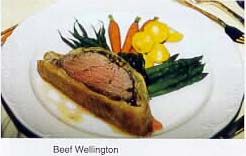 Bancroft Ranch 1993, this magazine's zine's selection of The "Best of The Best" in California Merlot. Cares is also serious about dessert wines, and the finale to this second menu could only mean the fabulous five star Chateau d'Yquem 1990 en magnum. He also insisted, however, on offering Bonny Doon Vin de Galaciere Muscat (California), and, what is getting to be a hot wine from France, Banyul Clos de Paulil 1994. Cares was right; he knew the Banyul would go splendidly with the chocolate dessert.
Terpsichore, the Muse of Dance, was invoked for the "third menu," Les Danses. The Cares's knew the score: waltzes, quicksteps, tangos, twist, swing, line, you name it. Kathy and Kaj Sonne, former dance instructors to the newlyweds, added their performance of a quickstep routine significantly called "Puttin' on the Ritz". The audience (we were no longer guests) was beguiled by the spectacular grace and form of fine dance by stars in the ballroom world. But not all was ballroom, by your-leave, may I have this dance stuff. The evening ended big time with rock n' roll. The young in attendance had their way, and youth will be served, as they turned into rock stars, gesturing, posing, vogueing. Herb Cares is not a rock n' roller, to say the least. Smoking his cigar, he sat passively, but appreciatively as sensuosity flowered. Fred Astaire, the man of countless steps, would have been pleased.

And did we mention the "fourth menu?" Superb cognacs (Remy Martin, Louis XIII, etc.) and cigars (Davidoff Anniversario #2 and Macanudo Vintage IV)? But the best was to come: Karen Cares stood, looking beautiful, and with superb mock solemnity thanked Herb for inviting her to his wedding. Applause was endless. The Cares's went to Italy for a honeymoon. Karen thought she'd trace some roots. Herb's idea of roots, however, is to scout the ground in Tuscany. After all, it was truffle time in October. 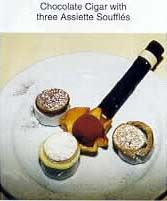